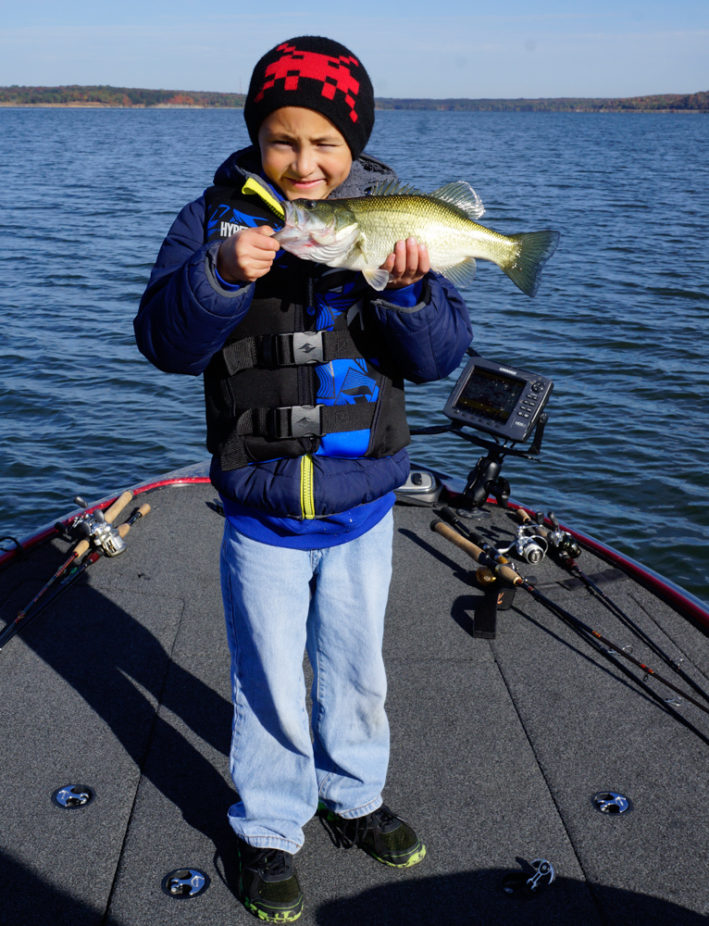 Winter’s Best Bass Fishing at  Lake of the Ozarks

Blowing snow stings your face and the wind pierces through gloves

to numb your hands. Even though the  frigid temperatures  turn your

rod tip  into an ice cube  after nearly every cast, you tolerate these

inconveniences in anticipation of catching the bass of a lifetime.

the winter, Lake of the Ozarks usually

offers an ice-free spot to catch lunker largemouth bass throughout

January and February.  Heavyweight bass in this central Missouri reservoir

to the cold water. A lure resembling the fluttering action of a

dying shad, such as a suspending  stickbait, works

best during  this time of year. Fishing pressure will also be minimal

in their warm homes.

largemouth should  pack  the thermal underwear and insulated coveralls

and  head for the lake.  Try the  following tips for catching  Lake of the Ozarks bass during winter.

mark hold schools of big bass during the winter at this

reservoir. Any time bass  have a channel bend they can move up from

the deep water  onto  a  flat  and eat shad.

deep and bass hang right below them. The fish usually stay 4 to 5 feet

under the baitfish so they can follow  the  shad school around.

Even though bass feed on baitfish during this time,  some anglers avoid

choose from there. So these local anglers try  channel bends with

sparse numbers of baitfish  where they can  work  a weighted stickbait

without  much competition from the natural forage.

A suspending stickbait in the clown color produces bass during this time. With four or five turns  of the reel handle you can  make  the

stickbait dive  down to a depth of 4 to 5 feet. If the lure is properly

weighted, it will suspend at the same depth or sink slowly.

twice.  A word of caution: the  more you twitch the lure, the smaller the fish

you will catch. Even though  the lure usually only dives down about 5 feet,

its action imitates  a dying shad, which draws bass out of the depths

When the weather turns nasty,  key on chunk rock points.

The worse the weather, the better the fishing so   when the

wind blows real hard and  it’s snowing, the fish will come up on

If you can stand the cold, this is the  best time to catch a 9- or

10-pound bass at the Lake of the Ozarks.  This pattern usually lasts until the end of March when the water warms

Copies of John Neporadny’s book, “THE Lake of the Ozarks Fishing Guide” are available by calling 573/365-4296 or visiting the web site www.jnoutdoors.com.