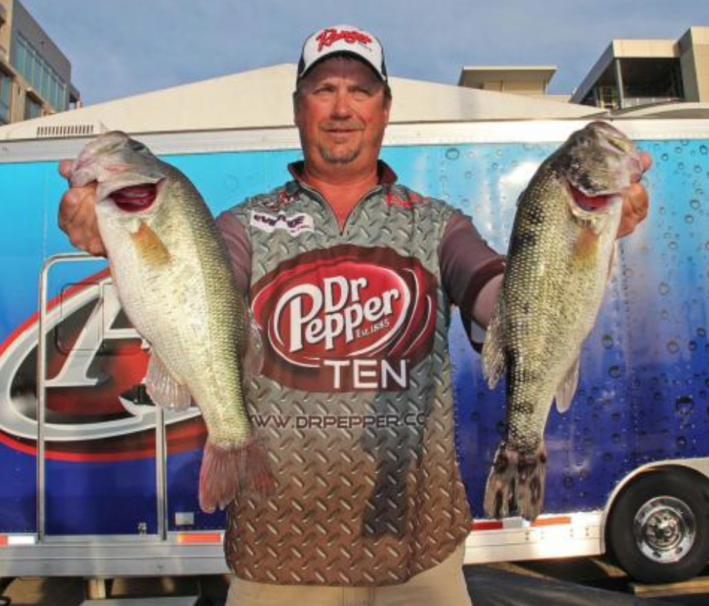 Catching Lake of the Ozarks Bass Through The   Spawning Cycle

When the water starts to warm in the spring at Lake of the Ozarks black bass  have the
urge to procreate.

During the spawning cycle, Bruce Gier, a former successful tournament competitor from Eldon, MO, takes advantage of this situation by
using various techniques to catch bass throughout the spawning cycle.  Gier regularly fishes the lake’s
North Shore area of Lake of the Ozarks. Pre-spawn on the lake usually begins the last couple
of weeks in April when the water temperature moves into the 50- to
58-degree range. The fish will be holding 10 feet deep along gravel
banks halfway to three-quarters of the way back in the coves. “They’re
going to come up on sunny days in the little pockets in the longer
coves,” Gier says.  Cool nights drive the fish back out to the 10-foot
range until the sun warms the shallows again the next afternoon.

The bass start losing interest in “chase-type” baits such as suspending stickbaits or crank baits.  Gier says the fish want slower-moving lures
such  as Carolina-rigged plastic lizards and worms or jigs and plastic craws.  Carolina-rigged  4-inch  worms or 6-inch  lizards
in watermelon seed or green pumpkin colors are deadly baits for pre-spawn
bass. One of Gier’s top big bass lures though  is a 3/8-ounce jig with a medium-size
plastic chunk, which he uses on 12- pound test or less throughout April.
He tries to imitate crawfish colors by using a black jig and black
pork frog in early spring then switching to a brown-on-brown combination
during the spawn.   Gier says the best way to work any of these lures
this time of the year is “slow, slow, then slower.”

During the first two weeks of May, the bass go through their spawning
ritual. “Whenever the water  starts tickling that 60-degree mark,
then the bass will go into the pockets all over the coves,” Gier says.
“They’ll get under those cables around the docks.  That’s their number
one spawning place–just where they can really deal you some havoc
when you lay into one of those big babies.” Gier makes it  even more
challenging by using 8-pound test at this time.

In the early morning, the bigger fish can be caught on jigs and pork
frogs in front of the beds  6 feet deep. When the sun comes up and
the boat traffic starts,   anglers will have to switch to tube jigs
and Flukes to catch nesting fish.

By the end of May, the bass  have usually completed the rigors of
spawning and try to recuperate by  hanging around boat docks near
sandy, gravel banks in the coves.  “They’re not hungry and they’ve
had two weeks of hard work before,” Gier says of the post-spawn fish.
A few bass can still be coaxed into hitting by slowly dragging  a
Carolina-rigged worm or lizard from the back corner of  a dock to
halfway along the  side of the floating structure. The fishing remains
tough until the bass move back into  deep-water brush piles for the
summer.
Gier also entices post-spawn bass with  a
unique retrieve of a jig and chunk. Rapidly jerking such a slow-moving
lure seems unnatural, so to make his presentation more lifelike Gier has devised   a slow-motion
ripping technique for the jig and its plastic trailer.

The local angler begins this technique  by pitching a jig and chunk to the shallows,
then  pulling it away from the bank about 5 to 6 feet.  Gier accomplishes
this by  pointing his rod toward the bank at about the 9 o’clock position
and then sweeping the rod back until  it’s behind him. Gier then positions
his rod in front of him at a 45-degree angle and keeps his line tight
as he allows the jig to fall. He believes this sweeping motion imitates
a crawfish  darting out of  the shallow rocks  and then falling to
the bottom.   “The bass  are looking up at that crawdad coming over
the top of them, then all of a sudden it flutters down to the bottom,”
says Gier.  “They will either bang it then or  when  you jerk it up
off the bottom  and let it fall again.”